The Society also supports the MHRA in publishing the Legenda series Research Monographs in French Studies, including appointing the General Editor for the series. 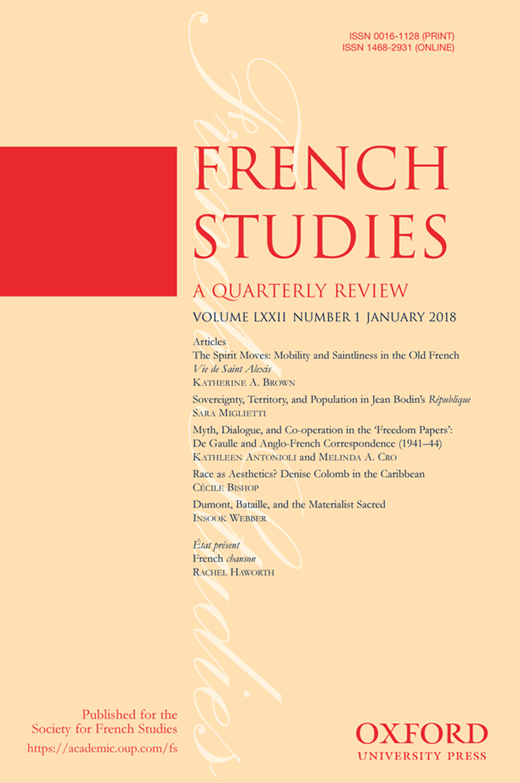 French Studies, published four times a year, is the leading UK-based journal in and around our discipline, with a longstanding reputation for innovative, cutting-edge scholarship. Coverage ranges across all areas of the subject, including language and linguistics, literature in France and the French-speaking world, thought and the history of ideas, cultural studies, film, and critical theory.

In addition to substantive scholarly articles of up to 9,000 words, the journal also publishes an unrivalled range of book reviews, and commissions regular états présents by leading scholars in selected areas of the discipline.

French Studies is published on behalf of the Society for French Studies by Oxford University Press. Full information on the journal is available on its website.

French Studies Bulletin: A Quarterly Supplement is the sister journal to French Studies and appears four times a year. It publishes short articles (no more than 2,000 words) in English or French on topics spanning all areas of the subject — language and linguistics (historical and contemporary); all aspects and periods of French/Francophone literature; French thought and the history of ideas; cultural studies; film; politics and critical theory – and on topical issues and debates.

The Bulletin also features reports of selected conferences, and publishes regularly updated information on the Society for French Studies, calls for papers and other notices of interest to researchers in French. A dedicated postgraduate bulletin board is among its newest developments. The Editor of French Studies Bulletin is pleased to receive notice of future conferences, including those organised for and by postgraduates, and to receive conference reports once the event has taken place.

The Legenda series Research Monographs in French Studies is published by the MHRA. Supported by The Society for French Studies, which appoints its General Editor, the series aspires to publish original work in all areas of the literature, thought, theory, culture, film and language of the French-speaking world. The distinctiveness of the series lies in the critical focus and relative brevity of its monographs.